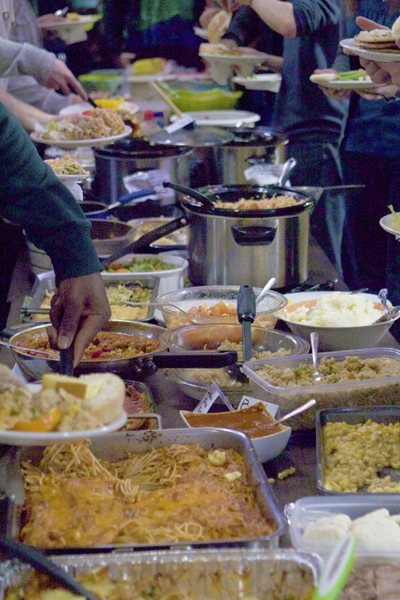 At This Table, Everyone Has a Place

Breanna’s chance to share her faith started with a simple question on the drive home from an Inter-Varsity event at the University of Saskatchewan.

It was a cold winter’s night in February and Breanna was giving a friend a ride home from an event called ‘Who Will Build the Bridge?’ During the evening, much of the conversation had centred on cultural reconciliation and belonging.

“Who are your people?” Breanna asked her friend.

“It was a question she hadn’t thought of much before,” says Breanna, but from there the conversation shifted to talk of faith and family history. Her friend was born to two Vietnamese-Canadian immigrant parents, both of whom loosely followed Buddhist traditions. As a second generation Vietnamese-Canadian with no real spiritual background, Breanna’s friend hadn’t found a community that she strongly identified with.

Breanna’s own parents were raised Buddhist before converting to Christianity, so she was able to relate to her friend’s story and, for the first time in their friendship, share the way that her Christian community and faith helped her family find belonging.

Conversation starters
The conversation between Breanna and her friend was exactly what Inter-Varsity campus ministers Rachelle Low and Kristen Westwood envisioned when they started brainstorming ideas for events on campus. They knew they wanted to create conversation starters, encouraging students from every background to gather and talk about their cultural experiences.

“Jesus invited everyone to the table,” says Rachelle. “He dined with sinners and with saints, with the religious leaders and the tax collectors and the prostitutes. Everyone finds their voice and their place at the table with him.”

Based on this idea, they started planning Table Events, inviting students from all backgrounds to come and find their place at the table, share a meal and stories of their cultural experiences and beliefs. All of the events were hosted at the University of Saskatchewan, with one sponsored by the student union and held at Louis’ Loft, a campus café.

A spark of something new
The first event in 2014, which attracted about 100 students, featured guest speaker Ray Aldred, the Assistant Professor of Theology at Ambrose Seminary in Calgary. Ray is passionate about cross-cultural ministry, and as both a status Cree and follower of Jesus, he offered the group a powerful example of how faith and culture can coexist. He helped students understand, says Rachelle, “that following Jesus doesn’t mean we have to leave our culture behind.”

When they hosted Who Will Build the Bridge? in February, they were hoping to begin answering some of the questions that were raised by the first Table Event.

“The first event sparked something new in our community,” says Kristen. “We began to ask deeper questions about our own cultural identities, and we began to long for reconciliation in our generation.”

Students shared their stories of crossing cultural barriers, and the evening ended in a celebration of Aboriginal culture as they joined in a traditional round dance.

Powerful storytelling
As a new school year begins, Kristen and Rachelle have planned Table events for each month.

“These have been powerful places of storytelling for Christian students and nonbelievers,” says Kristen. “We’ve had students share about mental illness, physical healing, being refugees, and what it’s like to be an Indigenous Christian. The students’ stories have been used powerfully to present Good News to their friends.”

This month, millions of Canadian young people headed back to school. Please pray that many will accept invitations from their Christian peers to sit down for meals together, discuss faith and discover full life.