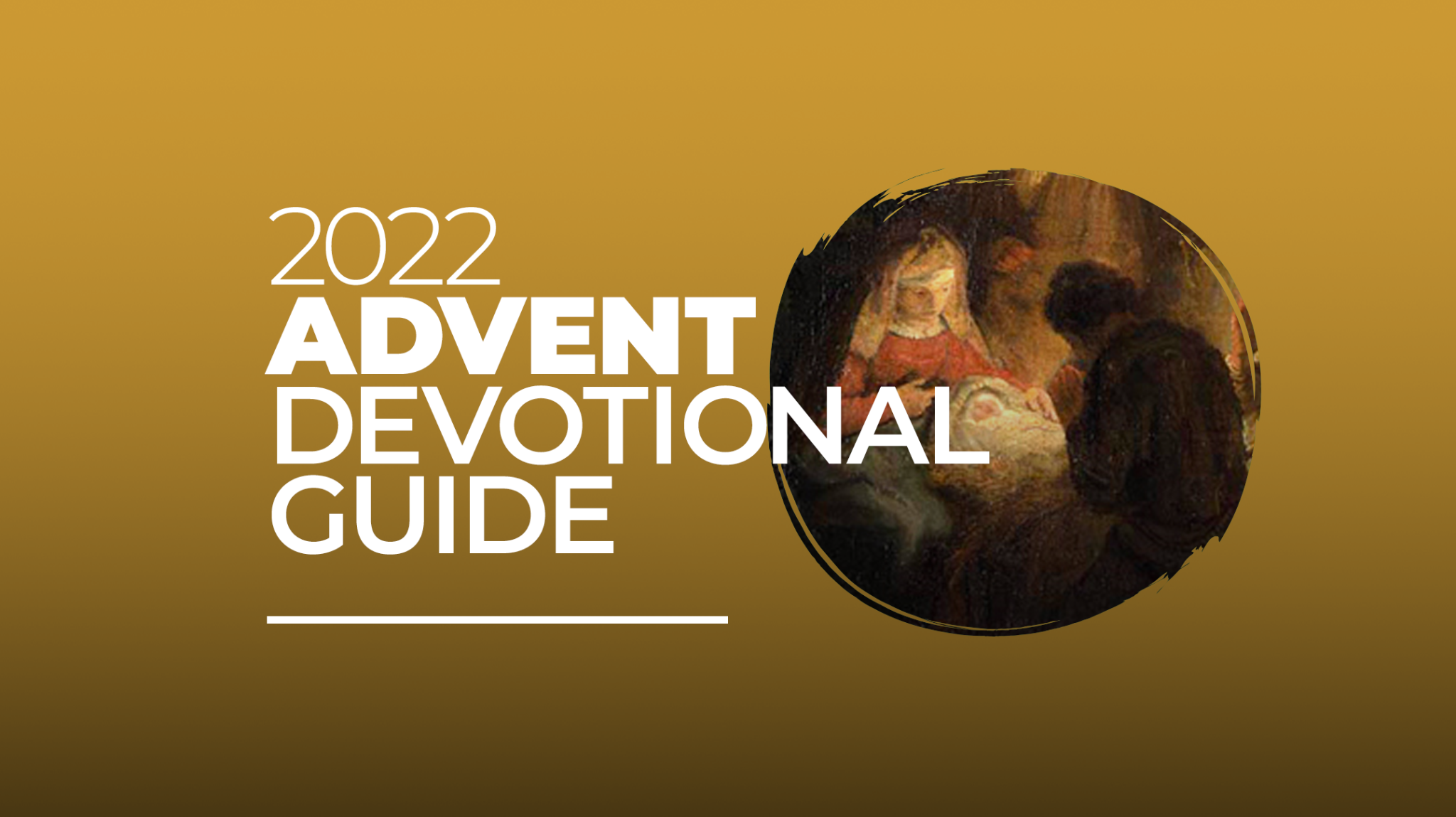 InterVarsity
Comments are off for this post
Share:
Welcome to InterVarsity’s 2022 Advent Devotional Guide. We will provide an image each week and invite you to reflect upon the image and accompanying Scripture. Members of our community have contributed their own reflections to accompany you in this Advent season as we seek and anticipate Jesus’ opening doors of hope.

It is the beautiful task of Advent to awaken in all of us memories of goodness and thus to open doors of hope.

Adventually:
We hold our breath, hold our hearts
Come again Prince of Peace

Coloured lights on trees,
Snow covered sidewalks and streets
The world is at peace

High fives, handshakes, hugs
Hold close now the ones we love
We welcome this peace

Carols on repeat
Christ child is celebrated
Come all you peaceful!

Outside my window, eight birches
Stand in quiet community
Wrapped round in paper
Torn and scarred
Reaching towards the sky
Rooted to earth
They remind me
To remember
That life includes
Waiting

The incredible truth
Creator entering in
Gaze in wonder all

Do not be afraid; for see—I am bringing you good news of great joy for all the people

from the seeds of tears
tis no single CN Tower
tis the skylines of a thousand cities
never named, never known to each other
a valley found and formed from a thousand whispered calls
etched in rock, signed and sealed migrations
born of forced digestions of imperial naval grazing.

When word comes down the road,
your silence will create
for words do see the other
they do not see the sentence ordered for them
they do not create their own meaning
some words farm, some words storm
some words are seeds, some words a forest
words are bricks, mixed in fire
words are dust, mired in spirit
All words are neighbors, though they never meet.

Let not your joy be born of cataloging every flower
let the garden be your palette.
worms and wheat together.
in your blindness, Creator walks
crossed in cataracts
carried onto the ship, wind rising, thunder brawling
where has this blood come from?
how has the pain stolen into his muscles,
sought to hide behind his eyes?

Come, the house of figs awaits
in robes billowing in light and linen
From eyes to his hands your tears travel
He flings them through slowed kairos breaths
From this, the seeds of many feasts

Diamond in the Rough

This week’s image is titled, ‘Lingering,’ provided by artist Jocelyn Worster, is from her exhibition Meeting by Light.

When Did God Say (December)

“let there be darkness”?

Not in the beginning
Not at the end either
I imagine
It must have been in the middle,
quietly – half breathed out to Himself
Drawing a close to long summer days
Or even crisp autumn evenings
With the wind suddenly running through leafless trees
playing overtures of music
we have all heard before:
The Descent of Darkness
Remember?
It’s called November.

“let there be endings”?

Because if God didn’t create endings through His beautiful spoken word
There can be no winter
To coldly end all thoughts of things growing again
While a deep white covering storms
Erasing all other colours in the world
For the next 5 or 6 or 7 months
This is reality, no pretending
We are held fast, gripped by this ending

And if so, did He ever call out to Son and Spirit and spiralling cosmos:

Or does God still work at night?
Twilight sure – but 2am? Or 3 or 4?
Pitch black. That’s a wrap.
Perhaps I fell asleep and missed it. I have slight photographic evidence.
Still – be still and know and have a little reverence.

“i do work at night and beyond endings”

A God for all hours and seasons
If you know where to look
Frozen landscapes and 4pm darkness
Can be cracked open and you find that
Joy still runs deeply through the frosted world…
If you can light a fire and turn on a kettle
You can even linger between the ending and the beginning
Alighted with the warmth from flame and hot drink, the smell of smoked and smouldered wood wrapped around you
Incense for your never-ending soul
You go back inside enlightened
Eyes still reflecting out to one another the fire’s last ember
Ready now for December

Yea, though I walk through the shadows
I will fear no evil.
But there is much else to fear
if I’m honest:
Loneliness, forgottenness, sorrow,
boredom, silence…
Evil doesn’t even make the list.
But there is another list:
rod, staff, table, cup

The Spectrum of Dark

No bow to take,
No purple patch or invitation,
No blues to sing or signals go,
No shining sun or amber nectar
No burning coals and embers glow

All colour gone, the blind leading the bland
Such beauty, invisible to the naked eye
Frightful noise, startling the naked ear
Unreadable signs, obscuring hidden destinations
Real danger and imagined, the devil in the lack of detail

But something has been separated
The first day observed as good
More bright and beautiful
Now embodied, come again
True light

Shining in the darkness

Our week one image, titled ‘Limina’, was installed at the Memory Garden of St John’s Shaughnessy Church, Vancouver, just before All Souls’ Day this year. Images provided courtesy of Robison Studios.

Blessed is she who has believed that the Lord would fulfil what he has spoken to her!
Luke 1:45

Your embrace runs through me.
Light, soul-fire.
What is happening?
Wanting more. Light of life.
Lover of my soul body fire.
Absolutely yours.
Yes.

I lean against the bathroom wall to keep from collapsing in despair as I throw yet another negative pregnancy test into the garbage. This is the season of advent, of waiting in hope for baby Jesus to be born. How am I supposed to celebrate the stories of two miraculous births in Luke 1 while my own womb is still barren?
I’m not as old as Elizabeth and I’m not unmarried like Mary but getting pregnant would require just as much of a miracle. My chance of conceiving naturally is less than 1% and the doctor has advised against IVF which is probably a good thing since as a campus minister, I don’t have $20,000 to put toward one month of IVF treatments.
I never knew that 1 in 8 couples struggle with infertility or that 1 in 4 women have a miscarriage until I became one of them. Why don’t Christians talk about this more, especially since there are 7 couples in the Bible who struggle with infertility and ALL of them end up with a miracle baby?
I know I’m not the only one feeling barren, grieving miscarried dreams, or laboring in ministry only to be rewarded with a stillbirth. What is the hope for us this advent season?
I unfortunately have not been visited by an angel telling me that God has heard my prayers, that God has found favor with me, or that I will become pregnant. I ponder the words from Elizabeth, “Blessed is she who has believed that the Lord would fulfill what he has spoken to her.” What is the word God has spoken that I can cling to in this barren season?
I hear Proverbs 23:18 echo in my heart: “Your hope will not be disappointed.” To be honest, I’m ending 2022 with lots of disappointment. And I know that the story isn’t over yet. But my hope isn’t in a baby. It’s in THE baby who came to us at Christmas. And so I continue waiting. In hope.

A sign of the promise?
Look to the stars.

What is hope, if not
bright lights in a sea of all-expansive darkness?

Guiding beacons for lonely voyagers,
so, we never lose our way home.

An ancient lament echoes through time
A voice, a place called Ramah
Not the sound of festive laughter
Guttural anguish from visceral pain.
Families ripped by violence
Murder by any other name.

In the aftermath of the mayhem
A name to the voice
Rachel weeping, refusing to be comforted
What is lost cannot be counted
Those who are missing will not be reclaimed
Desolation without consolation.